May the Fourth Be with You

Speaking of magnetic properties, what can be more attractive to a seven-year-old boy than the universe of Star Wars? I was seven when Star Wars first captured my attention and imagination, and it still has it.
Many (many) years later, in a universe very close, Star Wars seems to be more alive than ever.

What is it that we love about Star Wars? Is it the lightsabers, the laser-blasters, the cool ships, the droids? All of these things are big factors, but I suggest that it is the compelling story that is at the heart of our love of the galaxy far, far away. Good versus evil, in eternal struggle. Heroes and villains arise and battle for control of the universe. It is this galactic drama that has captured our hearts, minds and wallets.

With Disney’s purchase of Star Wars, we are insured that the stories and the wonder will continue. Between Star Wars memes on Pinterest, 122 episodes of Clone Wars readily available on Netflix, details of the episode XII movie being released, and the announcement of a new animated series Rebels, our world is inundated with Star Wars. 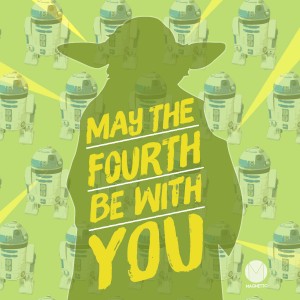 If all of those things aren’t enough for you, there is now an official Star Wars holiday. May the 4th. This isn’t some momentous occasion commemorating the emperor’s grip on the rebels, it is simply a small deviation of the ubiquitous phrase “May the Force Be With You”.  Its a day to see funny meme’s on Facebook and GooglePlus, watch old episodes on DVD and have plastic lightsaber duels.

It was all of the above, and much more, that inspired me to create the above graphic. The seven year old bay in me can’r help but to get excited about May the Fourth, so creating this graphic is my small contribution.
Here’s wishing all of you a happy Star Wars day.  May the Fourth Be With You!